A new life awaits you in Los Angeles, and by a new life, we really do mean a new one – the living conditions, environment, job opportunities, and other related aspects of the city are unique. At least they are significantly different from those of San Francisco, most would say, better in comparison. This is why the city has been consistently drawing citizens towards itself, all attracted by the prospect of a better life; if you too happen to be one of such ambitious people then we wish you the best of luck and assure you that our interstate movers will get you moving stress-free.

Every city in the world has its pros & cons. This is true for San Francisco and Los Angeles, two of the largest cities in the United States. If you compare the cost of living, you will find that LA is cheaper than SF. The rent price, housing cost, monthly expenses, groceries, child care… everything will cost less. This is why many SF residents are moving to Los Angeles, and our long-distance movers, at California Movers can make the relocation much easier for you.

*The price doesn’t include the expenses for moving personal items. This way of relocation is not an option for moving an apartment.

A large section of the San Francisco population, aided by long-distance movers, has been moving out for some time now. In 2017, it emerged as the top US city that registered the highest “outflow” of residents according to the Redfin report. More than 15 thousand residents moved to other places, which is 24% more than the next US city on the 'blacklist'. Relocation via interstate movers to other cities and states continued in 2018 In February, 49% of San Francisco residents were planning to move from the Bay Area according to a survey by Edelman firm. By October, the number of net outflow from San Francisco reached 28,000 as reported by Redfin reports, mostly through long-distance movers. The trend continues. So this is clear that San Francisco is not one of the best places to live anymore. 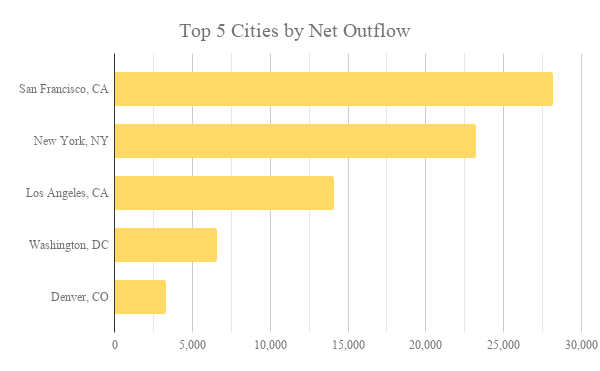 Another fact that proves a significant outflow from San Francisco is prices set by most of the moving companies. If you plan to move to Nevada from the Bay Area, be ready to pay twice more than if you move in the opposite direction. What are the most popular destinations to relocate to? The biggest number of the residents of the Bay Area prefers to move to Sacramento, but the City of Angels takes the second place followed by Seattle, Portland, and San Diego as we have learned in our years-long career as interstate movers at California Movers.

Undoubtedly, the main reason that makes people look for moving services and leave San Francisco is an overwhelming cost of living. Even Los Angeles being one of the least affordable cities on the planet seems to offer more reasonable prices for everything. If to analyze data by Numbeo, consumer prices are higher by 17%, groceries prices – by 26%, restaurant prices – by 8%. It is twice more expensive to study in the private school in San Francisco. Health insurance index is by 9% higher in the Bay Area. The overall cost of living in LA is 56% lower than in San Francisco, California. 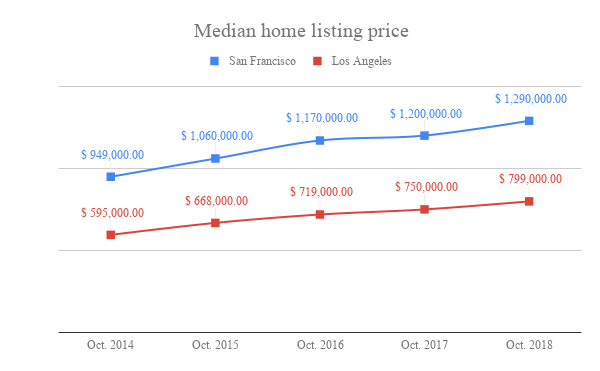 It is a common truth that the climate of California is the most preferable for life. Though both these cities are characterized by the Mediterranean climate, there is some difference in weather and climate between them. Los Angeles is generally warmer than San Francisco round the year, while the last one features a wetter and cooler weather. There are 73 rainy days during the year in the Bay Area with 603 mm of precipitation, while this number is only 300-380 mm in the City of Angels.

It is natural that moving to another city you think how to transfer your kids to a new school. However, you will be pleasantly surprised to learn that education in LA is a bit better than in the Bay Area. If to compare SAT test result scores, students from Los Angeles a higher average result of 1070 (1050 in San Francisco).
If to compare higher education, according to the data provided by TopUniversities, Los Angeles has been ranked 35th in QS Best Student Cities ranking. It has been achieved thanks to three higher educational establishments that are included in the world’s top 150. San Francisco took 38th place in this rating thanks to two prestigious universities that take the 2nd and 27th place in the world’s list. 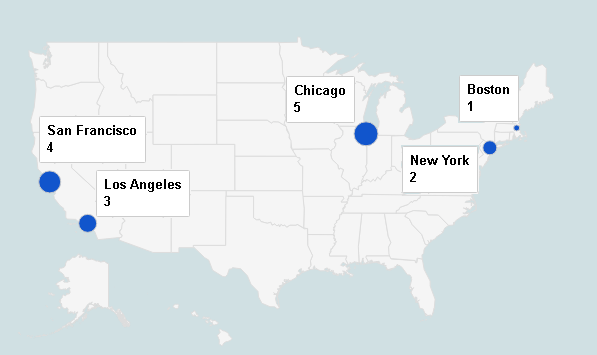 6. A diversity of outdoor activities and entertainment

Somebody will agree that both San Francisco and Los Angeles have a similar variety of different activities and entertainment, but still, the City of Angels is one step ahead. It is natural that a variety of trails, sandy beaches, mountainous areas allow taking up many interesting activities including surfing, hiking, climbing, cycling, and many others. Being home to Hollywood, it is the only place in the country where the number of movie stars and celebrities per square meter is very high. You can also see how modern films are produced and walk along the road where hundreds of famous people left their handprints.
In addition, Los Angeles can boast some unique events that take place only in this urban area. It is enough to remember the California Strawberry Festival or Los Angeles Marathon to understand the grandiose character of such events. You can also enjoy sports competitions here regularly, as LA is home to several professional sports team to cry for.

Naturally, these cities have features where it is impossible to determine a winner or loser. That is the reason why some lines in the table contain the word ‘draw’. For example, though it may seem that people who live in metropolises are estranged and think only about their own problems, in Los Angeles things are absolutely different. Of course, there are individuals into themselves, but the biggest number of population is sociable and open to communication. They are friendly and ready to support in any life situation. People living in San Francisco are characterized by many positive epithets too. They got used to their measured life and enjoy eloquent discussions as well as help each other in troubles.

Industrial diversity is another feature of both cities developed at a very high level. The major industries in Los Angeles are clean transportations and fuels, aerospace, medicine and biopharmaceuticals, education, entertainment, and tourism. In San Francisco, the largest industry is tourism, but fashion apparel, restaurants, healthcare, and education are also highly developed. Technology and financial services tale their decent place among major industries of the Bay Area as well. 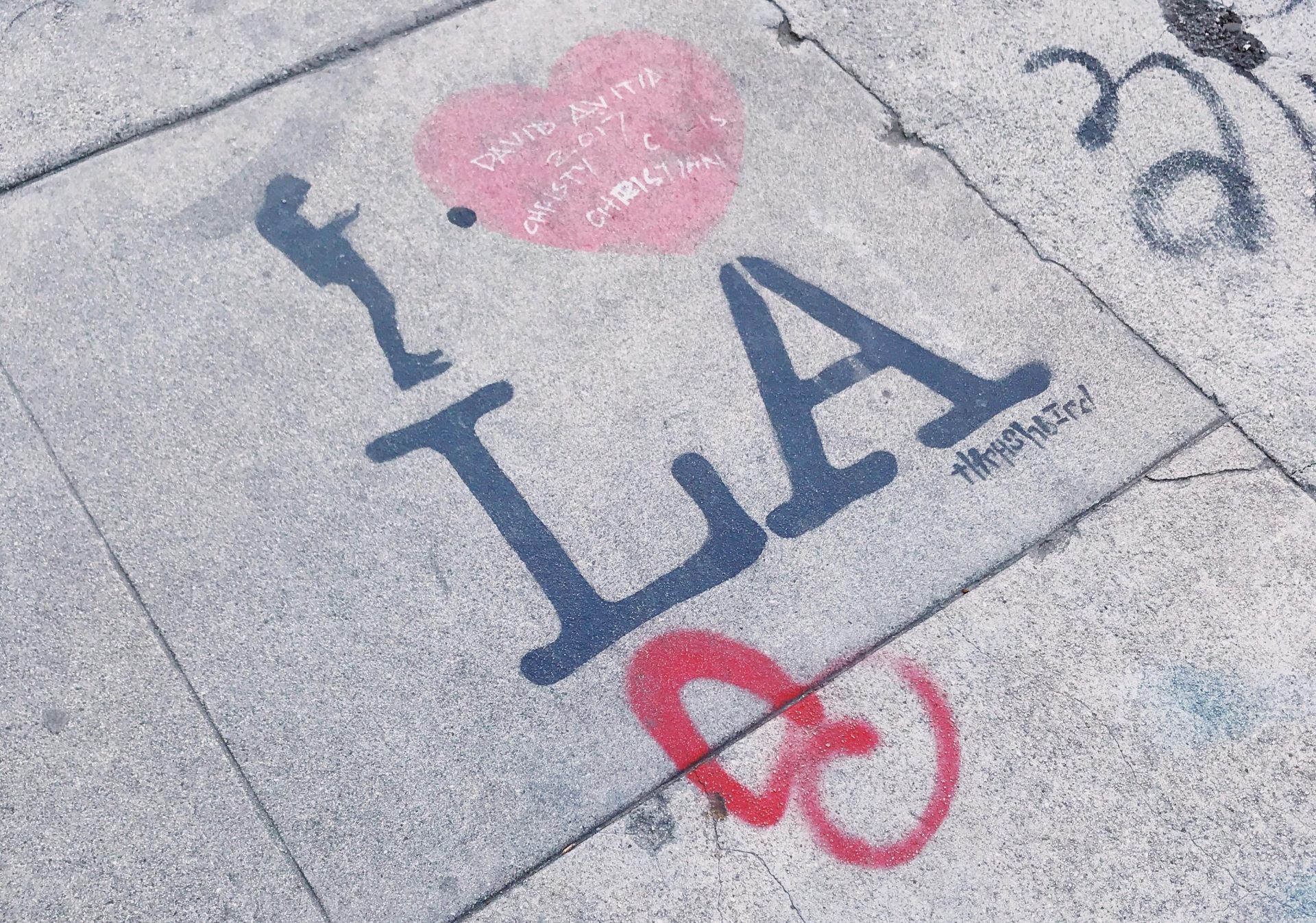 1. Traffic and public transport It is difficult to find a person who will agree that traffic in LA is tolerable. Vice versa, it is almost impossible to arrive on time in rush hours. People have to commute for hours to reach their final destination. Moreover, an INRIX data study ranks Los Angeles traffic the worst among 38 countries on the globe. If you plan to live in this city, be ready to waste 100 hours of your yearly life in traffic jams. In addition, public transport does not reach all the suburbs of the city, so your driver’s license can be in handy here.

Unlike Los Angeles, San Francisco offers more job opportunities for its residents. There is a rather low unemployment rate of about 2%. In Los Angeles, it is twice higher. Moreover, there is a tough competition for lucrative jobs as there are many educated specialists living there.

Los Angeles is one of the most densely-populated cities in the country. Over 4 million people live in the area of 500 square miles. There are many neighborhoods and sometimes it is impossible to get from one neighborhood to another one. So if you have friends or relatives in Los Angeles and you want to live not far away, choose the same neighborhood.

Los Angeles can boast rather complicated traffic signs, so not all drivers can clearly understand if it is allowed to park a car. Moreover, the number of cars in the city is very big, and it is rather difficult to find a parking place there.

Ways to move from SF to LA

Los Angeles is a very popular destination among those who move from San Francisco and there are two ways to relocate from one place to another: moving yourself or ordering services of the moving company. It is natural that cheapest way to move is to pack your belongings in one big bag and buy a ticket on the bus or train, but not everyone agrees to leave all the valuables acquired during the life. If you need to take all your belongings with, probably, they will not fit your vehicle or you will have to pay thousands of dollars to move it by plane. The only right solution in this situation is to entrust a reliable moving company with this responsible task.

California Movers has a dedicated team of well-trained movers to perform residential and business moving services at the highest level. We are a full-service company that also offers professionally equipped storage units to keep your stuff in safety. If you are planning a move, contact our managers and order a free quote right now. But if you want to get an answer to such important questions as how much does it cost to move heavy equipment or furniture or what is the cost of a truck rental, look through the table below. It will help you to count the cost of your moving to Los Angeles from San Francisco.

Relocating Your Office Setup Made Simpler

Office moving is especially stressful because not only is there so much stuff to manage, ensuring that nothing gets damaged, but there's your business productivity at stake here as well. Any professional will attest to the fact that if the workflow of workers is disrupted, then they'll be unable to work at peak efficiency, far from it, they may be unable to work at all. Thus you can’t sacrifice your workflow, but at the same time, you need to get moving, things can't wait. Our protocol in this regard is rather straightforward: we'll move your stuff during the off hours of your business so that the move does not kill your work productivity. On top of this, we'll ensure that none of your stuff gets damaged during the move so that you'll have nothing to worry about during and after.

You'll be changing apartments a couple of times in your life if your work takes you to new places, and if that is the case, you'll need our short and long-distance apartment moving services. If you’ve never moved your stuff before then you probably know very little about how hard it is to get things relocated from apartment buildings; we’ve got one word for you – stairs! Thus moving your stuff is only one aspect of things, the other worry is getting all your stuff to the new place without damaging anything. This, we guarantee that we can do for you.

Furniture, especially antique furniture is very hard to manage during a relocation, especially in long-distance moves. Furniture moving is a serious deal, no matter what the distance. You don't want a scratch on your precious table, that will ruin the look completely. At California Movers, we make sure that your furniture stays in pristine shape during the move. This is impossible to ensure unless you have professional movers like ours in the equation because anyone who has tried to relocate their furniture on their own knows how hard it is to ensure that the stuff stays in perfect shape. Antique furniture, pianos, and assorted items are hard to move, period. But we can handle them safely!