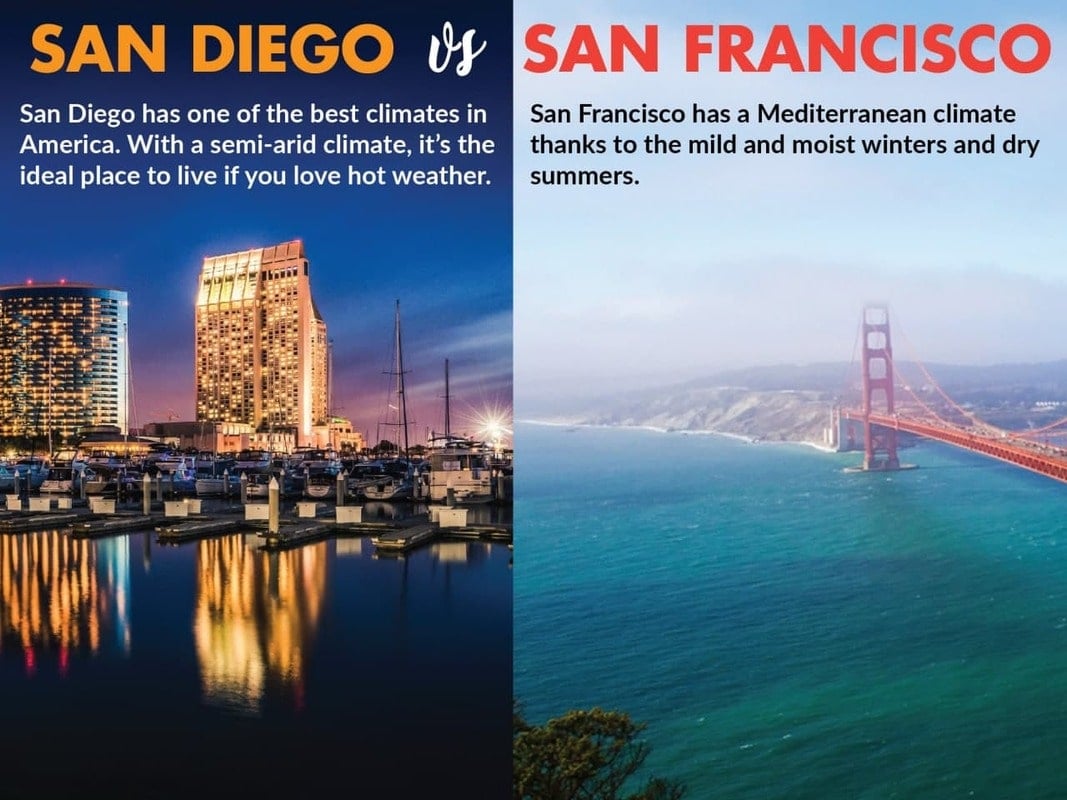 Located near Mexico's border, San Diego is considered to be California’s birthplace. This is because San Diego was one of the first areas that Europeans settled in. With natural open spaces located around the city, San Diego is a hilly and attractive part of the world, thus encouraging local moving.
To make sure San Diego is right for you to live, work, and raise kids, you need to go through all the key parameters for choosing the best state to move to. To do this, we look at the following criteria:

Now it’s easier to answer the question about is san diego a good place to live, because it’s really a good choice for the life of single people, and married couples and families with children.

Located on America’s west coast, San Francisco has many beautiful islands and is home to more than 50 hills. The city is located on the San Francisco Peninsula and is surrounded on one side by the Pacific Ocean along with San Francisco Bay.
Also, did you know that the famous Chinese Fortune Cookies were originally invented right here in San Francisco?

How far is San Francisco from San Diego?

Today, experienced carriers know that moving between cities is a complex process that only professional truckers can do. Most clients are wondering how long it will take to move to San Francisco from San Diego.

An interesting fact is that the duration of the journey from San Diego to San Francisco is 8 hours 21 minutes (according to information from Google), maybe a little more (depending on how fast the truck will move, whether there will be traffic jams or difficulties in general).

In turn, the mileage is approximately 808 kilometers or 501.8 miles. The road from San Francisco to San Diego is completely paved and suitable for large-sized cargo transportation, so the client can be completely and absolutely confident that the cargo will be delivered to its destination and at the agreed time.

The company offers to transport property from any place of the city, this can be done from SFO to San Diego, from any railway station, bus station, office or mansion, cottage or any other premises. The distance will be calculated strictly from the point of departure by the truck driver to the point of arrival anywhere in the city of San Diego. At the same time, the intercity route and the work of loaders are fully taken into account, and financial expenses for fuel are also calculated.

San Diego has one of the best climates in America. With a semi-arid climate, it’s the ideal place to live if you love hot weather. This is because the summers are warm and dry whereas the winters tend to be quite mild.
When it comes to the subject of rainfall, the area sees the most rain between December and March. Rainfall is typically between 9 and 13 inches each year.
May through December is very dry, although there will be a few wet days each month. When rain does fall it can be rather heavy.
If you’re a lover of snow you may not wish to move to San Diego. It has only snowed 5 times in the last 150 years, but this may make it ideal for office moving.

San Francisco has a Mediterranean climate thanks to the mild and moist winters and dry summers. The weather is mostly influenced by the Pacific Ocean's cool currents and San Francisco Bay. The climate is quite mild all year round, and there is very little variation in the temperature, perfect for most people looking for an apartment moving to the region.

San Diego is home to approximately 1,402,466 individuals in 2022, almost a 0.61% increase over the previous year’s number. Most of the population is aged between 25 and 34 years with 34 to 44-year-olds being the second-largest demographic; people pouring in via long-distance moving will most probably find a decent social circle.
If you want to understand the population distribution, this table of area divisions and zip codes (only the populated ones, there are 79 in total) can help:

More about the people of San Diego, when the Coronado Bridge opened in 1969, the first person to dive across it was none other than Ronald Reagan.

San Francisco is home to approximately 876,063 individuals, as of 2022. Most of the population is aged between 25 and 34 years with 34 to 44-year-olds being the second-largest demographic; if you’re considering local moving to the place, you’d find an optimally populated city.
There are 51 zip codes in total in San Francisco, here are the details of population distribution in the populated regions only: 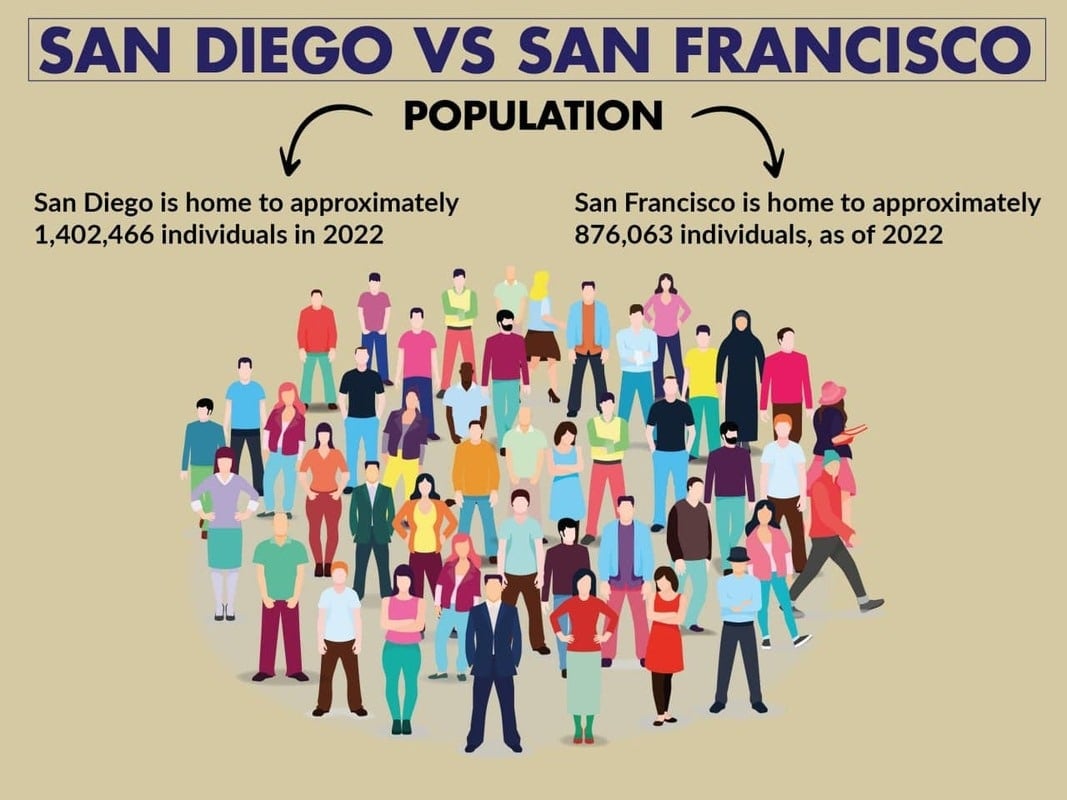 When planning a move to one of the best cities in the state of California, the key parameter of choice is the cost of living and there is an opinion that san diego is more expensive than san Francisco. However, the cost of living in San Diego is not that high. For example, a lunchtime menu in San Diego's business district costs approximately $16. A single liter of whole fat milk is just 93 cents. A meal in a fast-food restaurant is $8.
Individually, a person will be spending around $1,012 in the city on expenses other than rent, and this expense can be as high as $3,648 for a standard family of four. Overall, the city is less expensive, almost 23.83% less than New York, and the rent itself is also 31.02% lower.

San Francisco's cost of living is 37.9% higher than San Diego's. However, the employers pay a salary that is only 15.8% more on average, which means your quality of life will go down once you have completed your relocation to San Francisco. The current electric rate cost in SF is 19.39¢ / kWh, which is the 5th highest in the United States. Public transport is also costlier. It will cost you around $91.00 each month.
In comparison, San Francisco is more expensive; an individual will spend on average $1,254 on expenses save for rent. This number swells to $4,517 for a family of four. Though San Francisco is still cheaper than NY, by 7.03% in overall expenses, and 4.02% for rent, it is the more expensive option of the two (San Diego and San Francisco). Despite the high cost of housing in San Francisco, it is still more affordable than in many other US cities, because, analyzing the prices for renting and buying real estate san francisco vs los angeles, the first is clearly the leader in terms of budget.

San Diego is quite expensive in terms of the cost of a home. This is the case whether you plan to own a home or rent one. The local housing market has increased in value over the last 20 years and this is reflected in the prices.
The cost of a home is high even when you go by Californian standards. The average price for a home is $626,000. This is approximately $50,000 more than a home in Los Angeles.
To choose where to live in San Diego, having decided to move, it is better to choose areas that combine three key parameters - a high level of security, developed infrastructure and a variety of offers on the labor exchange.

The cost of a home in San Francisco is quite a lot more than it is in San Diego. Homes cost on average $1,360,000. The value of homes in the area has increased in recent years by 3.0%; however, they will likely fall by 0.1% over the next few years. 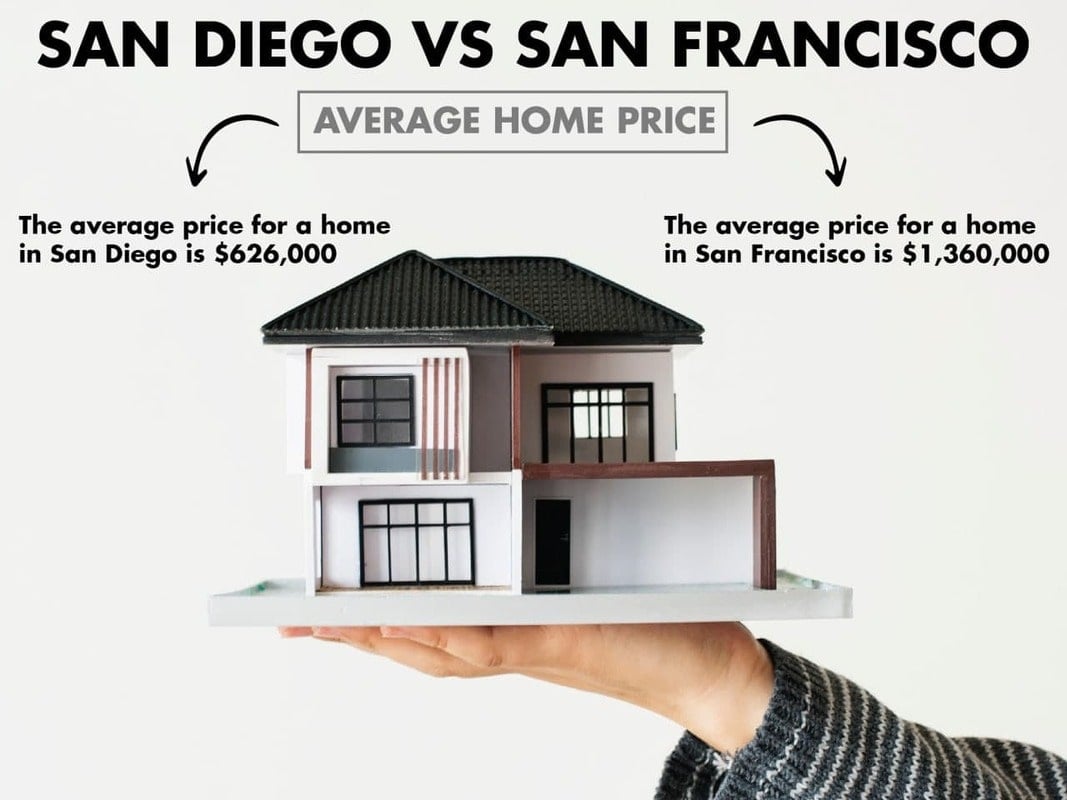 Some of the biggest employers in San Diego include:

Recent unemployment rates show that 3.0% of the population is out of work in San Diego. This is lower than the average unemployment rate for California, thus making it perfect for office moving. There has been a recent improvement in employment in the construction industry and educational and health services. Total unemployment has fallen by 0.5% over the last 2 years, as of 2022.

Some of the biggest employers in San Francisco include:

Recent unemployment rates show that 2.0% of the population is out of work in San Francisco. This rate is a lot lower than the average for California; if you plan to go for an apartment moving to San Francisco for employment, it will most probably work out fine. There has been a recent improvement in employment in health services and private educational services. There has also been an increase in the leisure and hospitality sectors.

what to do in san diego

San Diego is full to the brim of entertainment. From arts to concerts, live theater, and music. San Diego has it all. Throw in the nightclubs and comedy shows and it seems everyone is catered for. The San Diego Zoo, Balboa Park, and Hotel del Coronado are worthy of your time, and you’ll surely love it there.

what to do in san francisco

San Francisco has a lot to offer in terms of entertainment, especially to people who just arrive via a local moving company. There are many theaters, music venues, and sports stadiums.
Also, the beauty and allure of the city itself make it worthy of your attention, the iconic Golden Gate Bridge, Alcatraz Island historical attraction, and the San Francisco Museum of Modern Art can help you take the stress off your shoulders.
When we look at San Diego vs. San Francisco we can see that San Diego is the cheaper place to live. It has less crime, and the weather is ideal with increased employment and a lower cost of living, San Diego seems the ideal place to live. However, if you love great weather and you want to be where a lot of the action is in terms of entertainment, San Francisco may be the ideal location for you. You’ll just have to be prepared to pay more for your home and meals.
Though both places offer their set of pros and cons for relocation, your choice for residential or office moving may not strictly be dictated by what either city offers but by how your life guides you forward. If you're moving due to a job opportunity, either way, it will be good. Just be sure to explore your environment fully after local moving and socialize to fit in.

Need some important insights about living in San Francisco?

Do you need the help of professionals for your next long-distance moving project?