San Francisco migration has always been in the news. Like California, San Francisco is an attractive and fun place to live for every type of individual. For decades, people from across the globe have come to the city to live a better, affordable, and peaceful life.
As it is a well-developed city, there are ample resources for the immigrants moving to San Francisco. So, if you are planning to move to this amazing city in California, you may need to learn a few things. Read further guide of California Movers USA to know what benefits and amenities you can enjoy after migrating to this city. 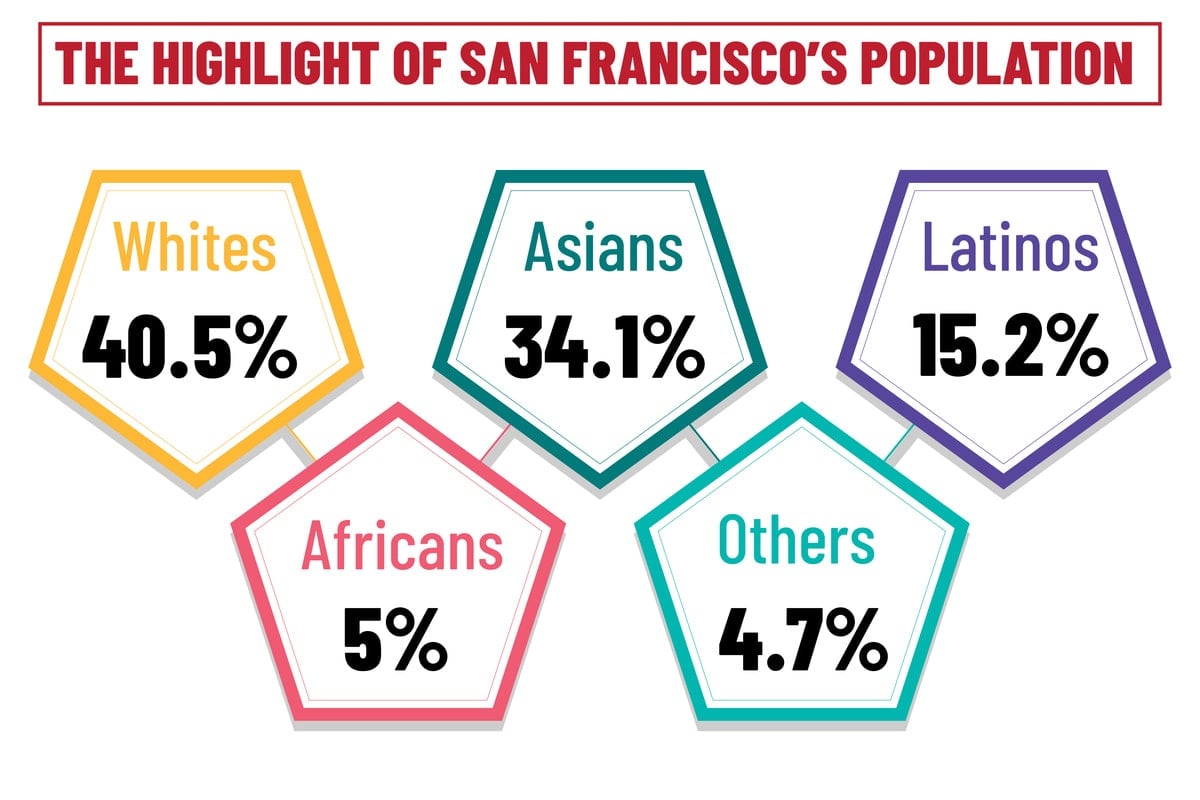 what is the population of san francisco

Besides that, the medium listing home price in San Francisco is $1.3M. The average listing property price per square foot is $1K, while the average selling price is $1.5M.

You can find people belonging to different cultures, languages, and backgrounds. Population of San Francisco consist of around 40.5% Whites, 34.1% Asians, 15.2% Latinos or Hispanic, 5% Africans or Black Americans, and 4.7% other races. Apart from these, you can also come across Native Hawaiian, Pacific Islanders, Alaska Natives, and American Indians if you move to this city.

Note that some of the different ethnic groups in San Francisco are immigrants that have come from another country, other states in the US, or other parts of San Francisco.

There are several hospitals, healthcare facilities, and pharmaceutical companies, which employ around 10.9% of the total population of San Francisco County. 8.9% of people work in the retail sector, 8.3% work in accommodation, and 7% work in the education industry.

Some other sectors that employ a big portion of San Francisco Bay Area population are as follows:

Since the employment rate is exceptional in the city, there is a low risk of crimes. Only 1 out of 178 people became a victim of violent crime recently. Not only this, but the violent crime rate per 1,000 residents is 5.63%, which is lower than most US cities.

You might be surprised to know that 88.5% of the population of San Francisco Bay Area has graduated from high school. This means that most people who reach the age of 18 or above prefer to continue their education. On top of that, approximately 58.1% of the individuals are college graduates, and 5.9% have attended college.

You may also want to know that there are some top-notch educational institutions in the city. Some most popular ones are:

As a major portion of San Francisco Bay Area population belongs to different ethnic and racial groups, you can find different people in educational institutions. About 16.9% of White individuals enroll in schools and colleges. Out of the total student population, 7.3% are Black, 31.9% are Hispanic, 42.7% are Asian, or Pacific Islander, and 1.2% are Native of Alaska or American Indian.

An outstanding education, employment opportunities, and affordable housing make San Francisco the best place to live for families or career-oriented people. If you want to live a happy and peaceful life, you need to move to the city. If you would like to move, you can get help from a local moving company to make the process easy and hassle-free. 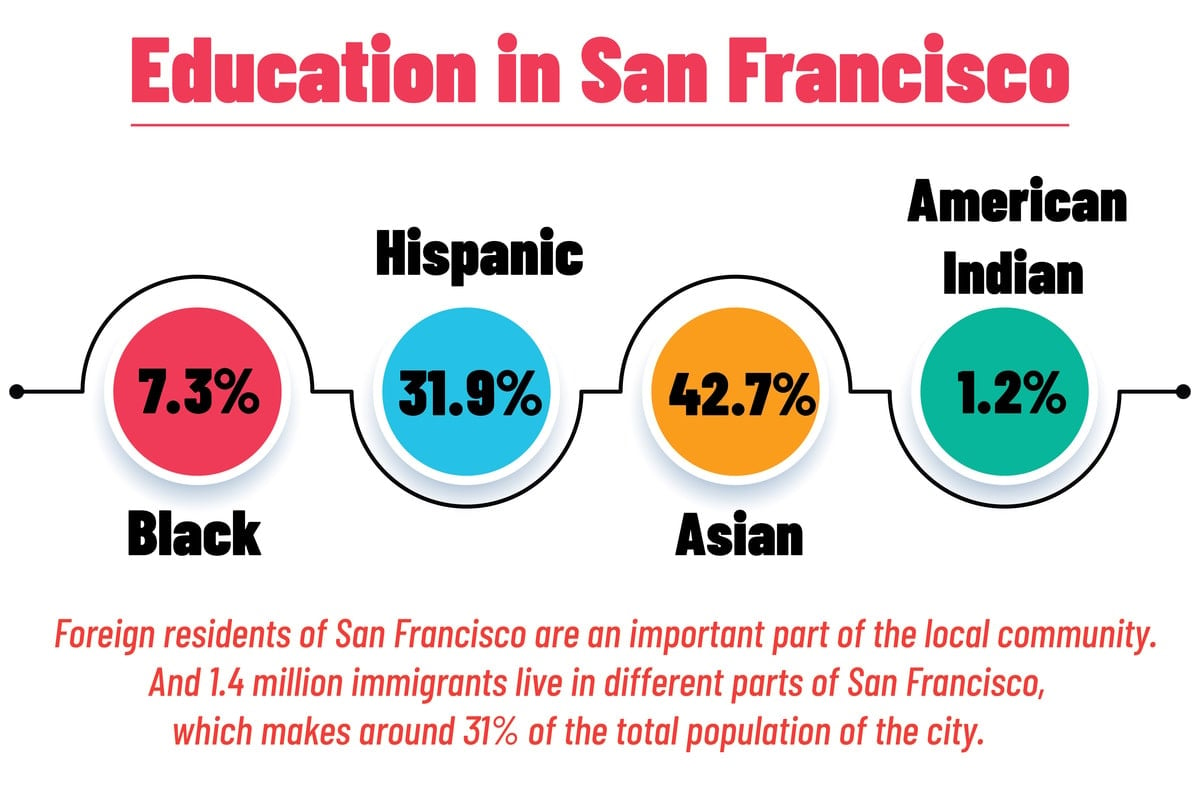 Hence, it covers a big portion of California's immigrants, which is 10.5 million. These immigrants have come to the city for several reasons, such as better healthcare, jobs, education, and business purposes.

Similarly, in San Francisco, one out of two children has immigrant parents. These children are of different age groups, ethnicities, and cultures. Most importantly, the immigrants are spread throughout San Francisco, living in different neighborhoods.

The most surprising part is that 1.2 million immigrants in San Francisco have lived in the US for more than a decade. And most of them continue to live in the city for their entire life, while others relocate within the state or country.

Finding a suitable house in San Francisco is not as challenging as other cities. You have several mortgage options, professional help, and affordable housing to make your dream of homeownership come true. Moreover, many moving companies in San Francisco help people move within or outside the city.

For instance, local long-distance movers help you transport your furniture and other items to a new location. Due to excellent professional help, it is easier to purchase a house and relocate to the city.

These are some reasons for a high homeownership rate in San Francisco, which is 57.2%. The percentage is even higher than the statewide average of 53.9%.

Around 305,500 immigrants in San Francisco are homeowners. They have purchased every type of property, including condos, apartments, townhouses, and lofts. The houses are present in different San Francisco neighborhoods, such as Chinatown, Mission District, and Union Square. Plus, these homeowners live with families, spouses, or alone.

San Francisco is the best city to begin your entrepreneurial journey. Many people move to the city either to relocate and expand their current business or enter the business world. Not only this, but around 99,500 immigrants in the city are entrepreneurs.

The best part is that immigrant business owners work in all types of fields. You can find them in textile manufacturing companies, food processing brands, and shipbuilding.

The electronics and aerospace industry in San Francisco is also strong and booming. Many immigrants have established businesses in these filed and produce high-quality and impressive devices and products.

San Francisco migration are contributing to the growth and development of the economy. Besides giving their time and energy, they pay annual or monthly taxes to boost the economy. Note that immigrant-led households earn around $74 billion every year. Like all the other residents, these people pay taxes due on salaries. This way, they contribute $6 billion in taxes, including local and state taxes.

In addition to it, many San Francisco immigrants also pay federal taxes that make around 16.1 billion. These taxes help the government support local communities, develop programs for the poor residents, and invest in development projects. In other words, immigrants are playing a great role in the progress and development of the city.

This means that 65% of California immigrants participate in the labor force which is more than the native-born population's share of 63%. 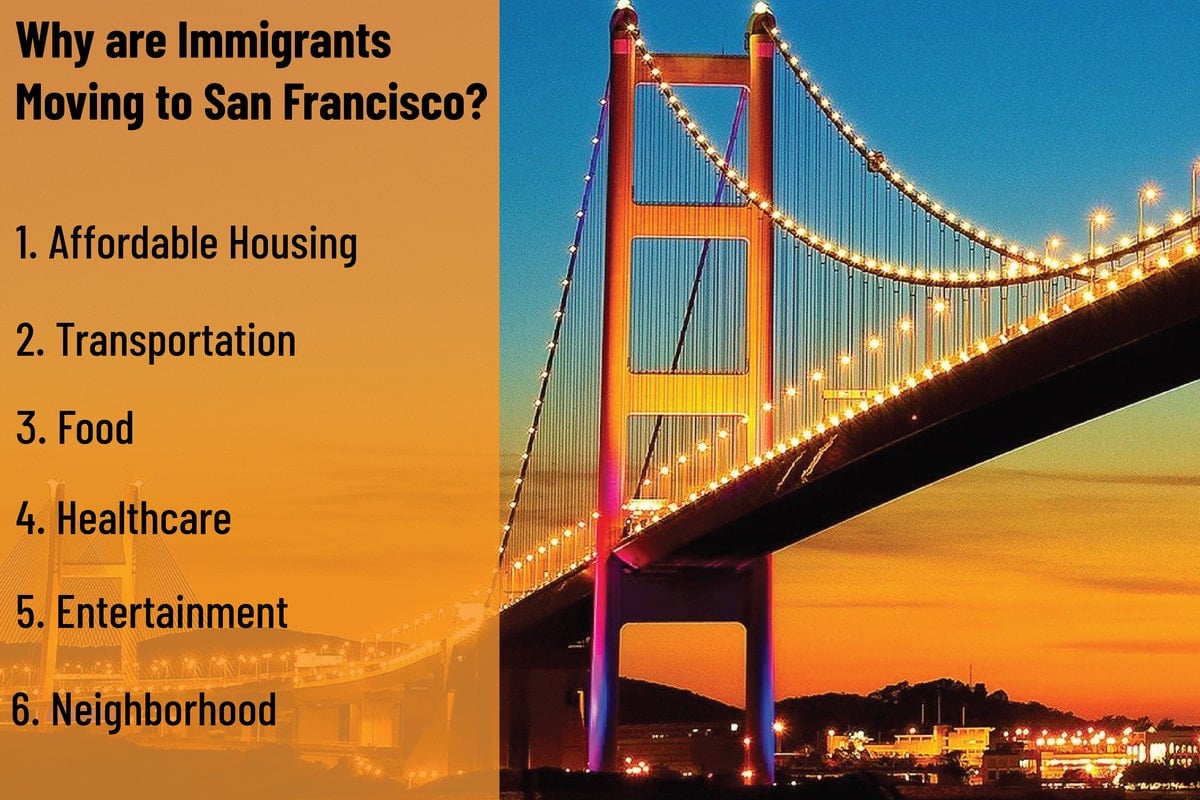 reasons to move to san francisco

The average individual in the city spends around $4,900 annually on transport-related expenditures. This is quite low than other US cities. If you only use public transport, the cost is even lower. Yes, there is public transportation option in the city, such as busses and trains.

Many food items in the city are extremely affordable for most population of San francisco County. For instance, on average, an individual in San Francisco spends about $3,792 on groceries annually, while monthly expenses are around $312. A family of four spends about $11,106 yearly.

Well, healthcare is expensive in most parts of the US. While we can’t say that you can avail healthcare facilities at extremely low rates, still healthcare services in San Francisco are comparatively cheaper than in the bigger cities in the US. You can even purchase insurances to cover your healthcare cost.

If you want to live an entertaining and fun life, San Francisco is an ideal option. There are several recreational activities, adventure parks, and other places to entertain you. You can even participate in the monthly cultural festivities and public events with your friends and families.

Neighborhoods like Coleman ST, American Conservatory, Ingalls ST, and Bayview are ideal for families and couples. They offer you all types of amenities and features that you need to live a peaceful and stress-free life. You will be happy to know that San Francisco bay area population are quite friendly. This makes it easy for families to settle in a new place.

If you are planning to move to San Francisco, you might need assistance transporting your necessary items. In that case, hire a local moving company so that your electronic devices, heavy equipment, and delicate household items don't get damaged or broken during transportation. 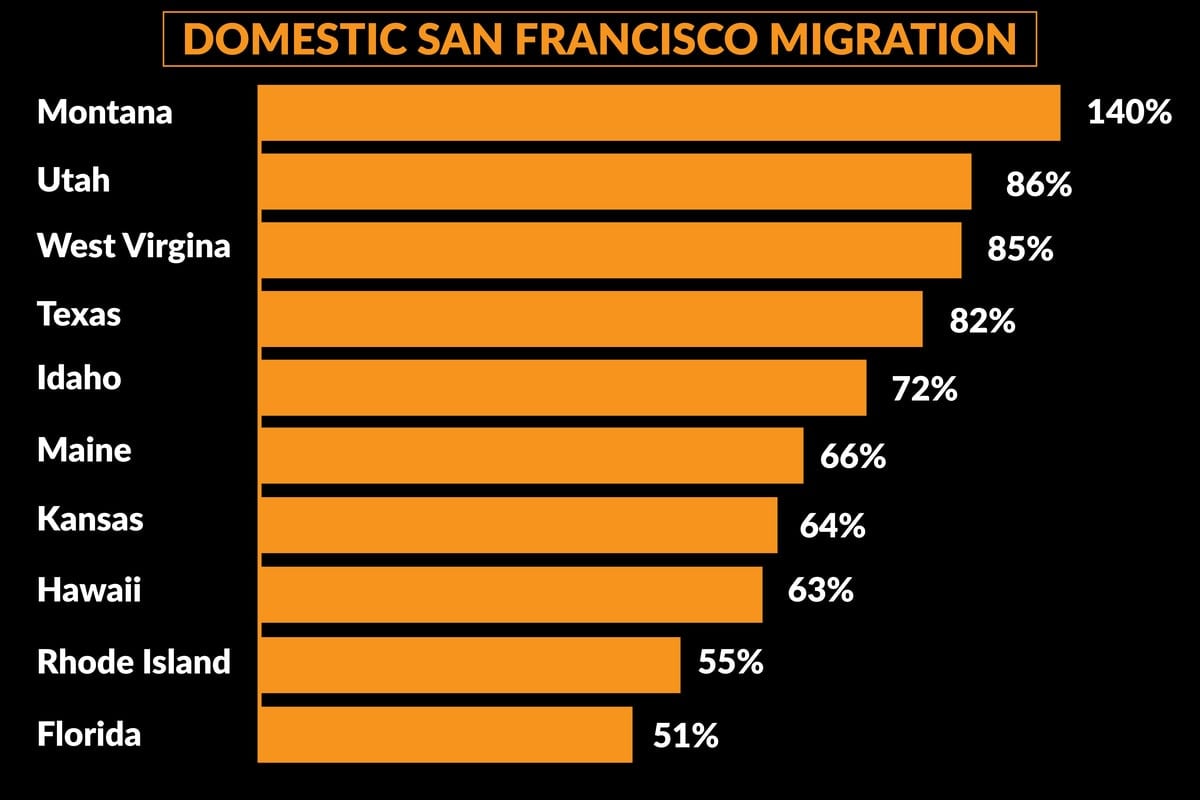 Although many people are coming to San Francisco in search of better life and career, many residents are also leaving the city. In fact, since 2016, the city has been experiencing considerable domestic San Francisco migration.

The highest number of people who have left the city have moved to other cities and areas of California. Stats show that most migration has occurred from San Francisco to San Jose, Sunnyvale, and Santa Clara, up to 20,000 people. Apart from this, many people prefer moving to Sacramento, Roseville, Arden, and Los Angeles.

As domestic migration is more prevalent in the area, research shows that residents of San Francisco are also moving to New York City and Seattle. Both of these cities are pretty expensive. Some other cities and neighborhoods where migrants are moving to are as follows:

Some states have seen many San Francisco migration in recent years. The top on the list is Montana, followed by Utah and West Virginia. Of course, there are some reasons why people have moved to these states.

The biggest one is to live a luxurious life in popular states. Due to the lower mortgage rates and affordable housing market in the US, it has become easier to purchase houses in these locations than before. You can easily find mortgages with terms of 15 years and 30 years and start your new life.

Here it is vital to understand that only wealthy people migrate to these cities. In fact, most migrants of San Francisco are rich or high earners. The low to medium-income individuals in San Francisco still prefer to live in the city. 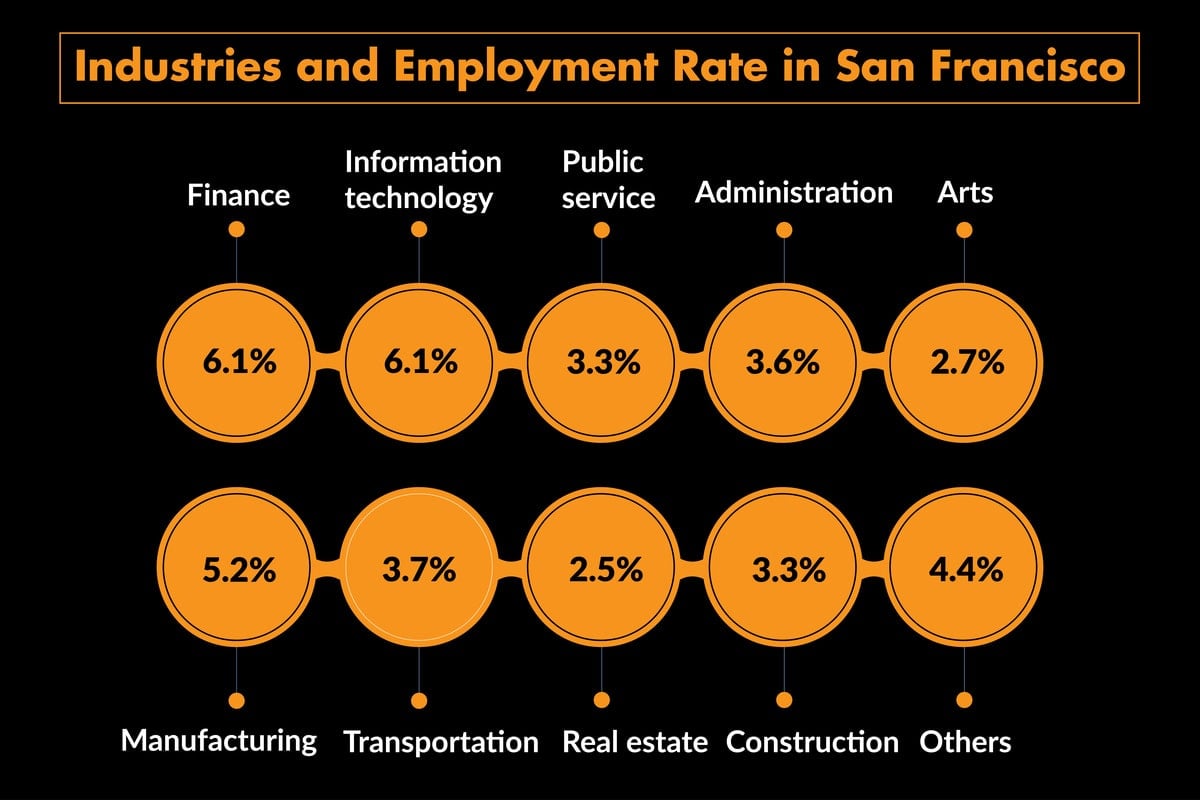 tips for moving to san francisco

Now you know why San Francisco is one of the most preferred cities in the US. So, if you have made up your mind but are worried about the stress and effort you have to put into moving, we are here to help you. California Movers USA has a team of experts that securely packs your belongings and transports them to your destination.

The best part is that you don’t have to do anything. Besides that, we can also help you open your packed items and organize your new house.