Thousands of people move to California every year. Many of them possess guns and need to know if moving to California with firearms is permitted. If it is, how exactly does California gun permit work and how can you register your firearm? In this article we will get to the bottom of these questions alongside understanding how you can move with guns in the state and what the gun restrictions here are.
As a “may issue” state, California allows most residents to carry concealed guns. However, the criteria for issuing these guns vary depending upon the state’s rural counties and urban areas. When you’re moving to California from Texas or other states with different gun-control laws, it’s important to remember that California open carry of loaded or unloaded guns is generally not allowed here.
If you’re moving to California, make sure you’re thorough with three important aspects related to the state’s firearms laws: the transportation of your guns, the possession of your guns and receiving your gun permit.
As a general rule, if you’re transporting a gun in your vehicle, you will have to make sure that it is unloaded and secured in a gun locker storage. For non-concealable weapons, the gun is required only to be unloaded when in transit.
Before you plan to move to a new location, you need to clarify how to register a gun in California if you have a weapon or plan to purchase it upon arrival. Read along to understand how you can move to California with firearms.

How to Legally Move to California with Guns?

People who are used to keeping guns in the home for self-defense, professional hunters, or people whose profession involves guns should be familiar with the laws regarding california guns when planning to move to a new state. Before moving to a new state by people whose hobbies or jobs involve the use of firearms, you need to find out in advance can you carry a gun in California or if it is prohibited in the state. Each state has its own rules regarding the acquisition and use of firearms, so gun laws in california may differ markedly from those in the original state. There are several requirements that you must adhere to when transporting your gun in the state. These requirements are generally based on the kind of gun you’re transporting, like:

To be able to transport a handgun in your car legally, make sure your handgun is:

A handgun usually includes semiautomatic pistols, revolvers, and small firearms that come with a pistol grip.

As of now, carrying or transporting an assault weapon is illegal in the state of California (with very limited exceptions).
According to the state’s firearms law, the transportation of assault weapons can only be done by certain individuals including:

For a detailed understanding of gun transportation rules in California, you can head over to the website of the State of California’s Department of Justice (DOJ). 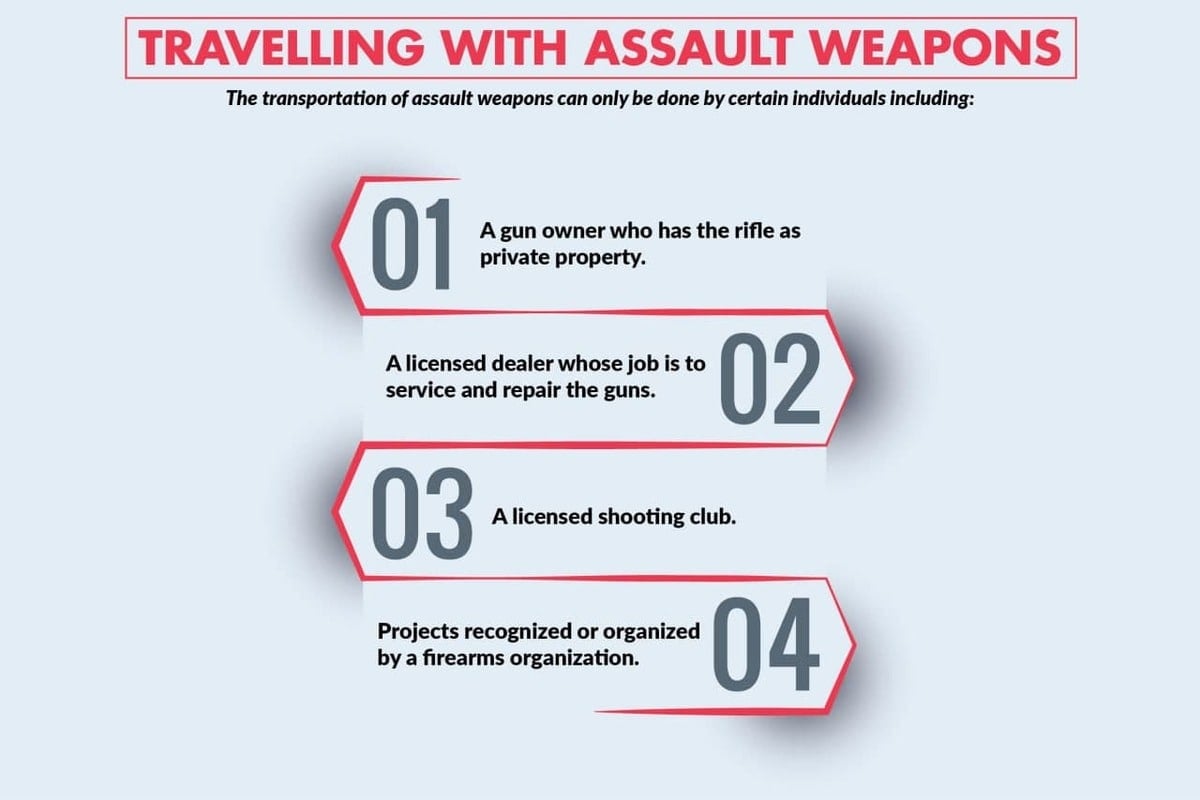 All firearms must be licensed, so it's important to know how to get a gun license in California when you're moving to a new place, and is it legal to own a gun there? Find out which california gun license you need if you need to purchase a gun in a new state for work or personal use. According to the state’s firearm laws, anyone who brings a gun in the state is a “personal firearm importer.” In other words, as a firearm owner, you are required to perform one of the following steps within two months of moving to California:

If you choose to retain your firearms, make sure you acquire the California Firearm Safety Certificate and also get a gun permit.
In case you decide to transfer or sell your gun to the police department, make sure you first approach a law agency to gather the instructions involved for the process. 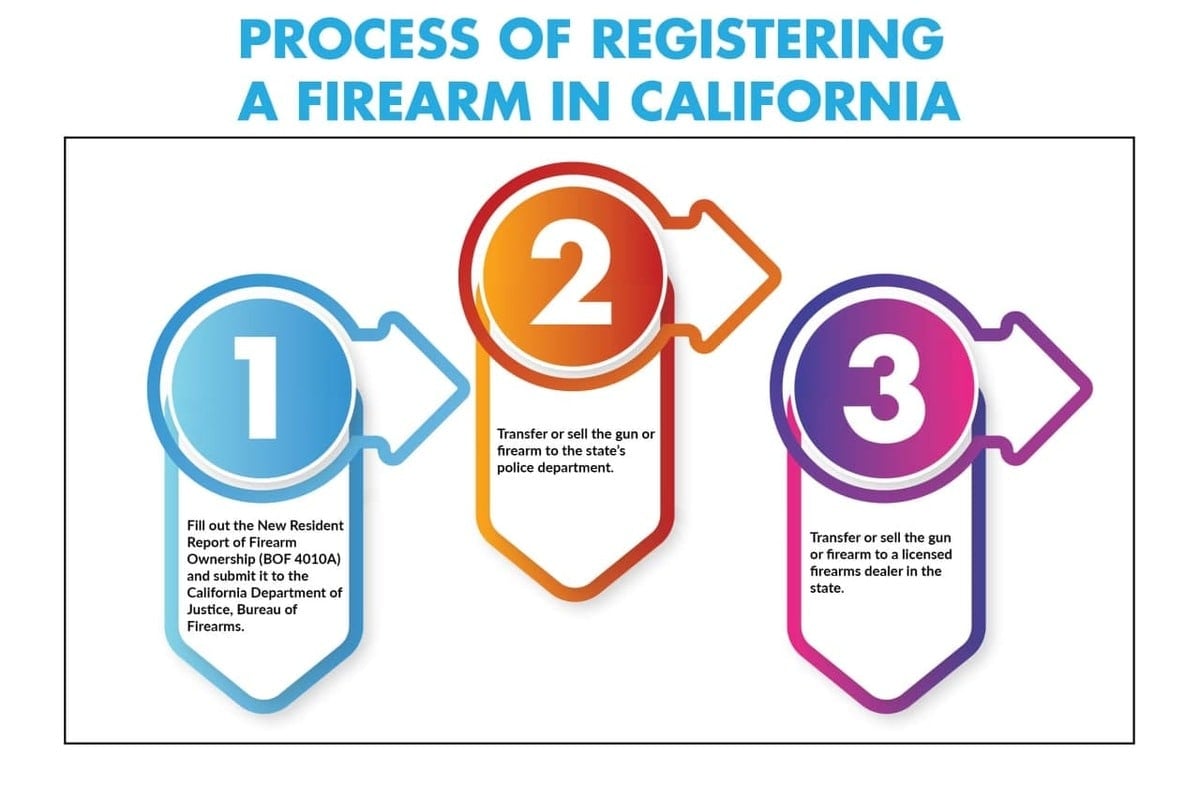 How to Get a Gun License in California

If you’re planning to move to California with weapons, it’s important to understand the state’s gun laws. In comparison to other states, the gun laws here are quite tricky. Even if you have permission for the ownership of firearms like a small handgun, rifle, or others from another state, it will not be eligible in California because it does not honor other state licenses. For this reason, you need to understand how to get your gun license.
In California, the equivalent of a gun license is what you call, a Concealed Carry Weapon (CCW) license. A concealed carry permit makes you eligible to carry a small handgun with you. While you don’t require a specific gun license to buy a gun in California, it is recommended to get your Personal Firearms Eligibility Check (PFEC) and your Concealed Carry Weapon (CCW) license. These valuable documents are proof that you are an eligible firearms owner and you can use your gun.
If your next question is, “how old do you have to be to buy a gun in California?” here’s the answer: you need to be over 21 years old to buy a gun in California.
Read along to know procedure of obtaining a concealed carry permit in California.

In order to move to another state with your gun, it is important to learn the laws of california gun to rule out any problems with the current legislation. The overall procedure of acquiring a gun permit consists of three phases, with the starting phase being the application process.

The first phase to acquire a concealed carry permit in California involves filling out and submitting an application to all the issuing agencies. In other words, you can submit your application either to your local county sheriff or to the head (or chief) of your local municipal police department. The initial fee for submitting the application may vary for different agencies. However, the average fee is usually between $100 and $200.

During the interview, your local issuing agency will ask:

The agency will also record your fingerprints during this phase. There might be some agencies that may call you for a second interview.

This phase is not required in a few cities/counties. If it is mandatory in your area, you will have to go for a psychology test. This test helps the issuing authorities determine whether you’re mentally fit for owning a gun. This test will cost you up to $150.

Who is Prohibited from Firearm Possession or Gun Permit?

As per the state law, the following people are not allowed to own or use firearms:

While you can get your gun along when you’re moving to California, the state still observes certain restrictions on weapon import. Here are a few of them to take note of:

how to get a concealed carry permit in california

As per the state law, here are the restrictions in relation to concealed weapons permit in California:

Additionally, California’s red flag law allows teachers, coworkers, and employers to put a restraining order on someone they might feel poses a threat to the lives of people.

So, that was the complete guide to moving to California with your guns. If you possess any firearms, be sure to understand the complete procedure of possessing them legally in California. From transporting and registering a firearm to getting your firearm license, a lot of local laws are involved during this process, especially if you’re moving to the Bay Area.
With your gun transport now sorted, have you decided on your moving plan yet? If not, we’re here to make it happen with just a few steps. From packing your house to moving it to California (with all the care in the world), we’re the professional movers you can trust. Get in touch with us if you need help with the perfect moving plan.