Is Fresno, California a good place to live: moving guide

California has always attracted people with its sunny weather, nice beaches, high level of life. Many people come to this state in search of a prosperous life, but not everyone can achieve that. However, it does not prevent people from other states, countries or rural area look for a better life in big cities of California. Not only Los Angeles or San Francisco attract new residents – moving to Fresno has always been very popular too. 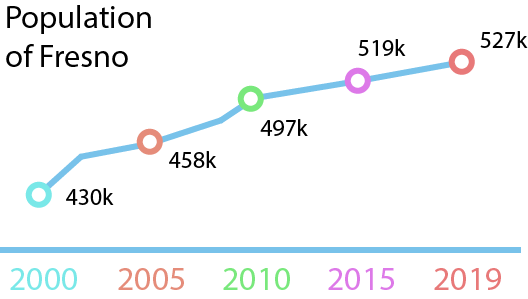 Being the fifth largest city in Sunshine State, more than half a million people live there. The city growth rate has never dropped below zero. Within the period of the 2000-2010 year, the population of Fresno has increased 41% and it continues to grow very fast, especially because of the growth among Hispanic residents who arrive in the city in search of jobs. It is interesting to find out that only half of the local population lives in their own homes. The second half of all the houses are rented by people who have moved to this city. Nevertheless, Fresno remains a good place to live and work, so many people choose it their destination for relocation.

Top reasons why Fresno is a good place to live

Many people call living in Fresno great, but what exactly makes it so attractive? In general, there are many reasons to call Fresno a perfect city for living in California.

Fresno is one of the cheapest cities to live in California. According to GoBankingRates, it is enough to earn $44,500 annually to live happily in this city, while this amount is twice or even thrice bigger in LA and SF.
What makes Fresno the best city in California is a cost of living index. It is 60% lower than the average one around the state and is only 7% than the national average one. Even housing in Fresno is one of the most affordable ones in CA. The median home price is $228,600 that is twice cheaper than the average Californian one. Of course, you will have to pay a bit more for transportation and utilities here, but groceries and healthcare are even cheaper than around the country. 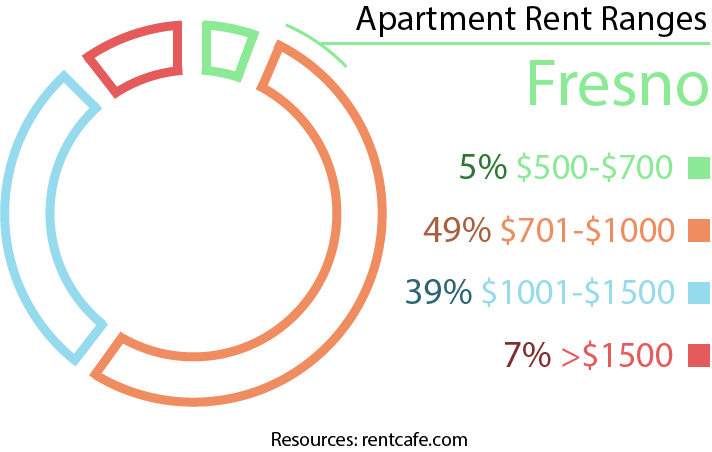 Prices for rent are twice lower than in CA and much lower than in the country – you need only $770-$790 to rent a 1-bedroom apartment in Fresno.

2. Location in the central part of the state

Another great benefit of this city is its location. Despite the fact that it is not a coastal city, it will not take you much time to get to the Bay Area by car. Being the heart and geographical center of California, the city is lying in the central part of the San Joaquin Valley. There are several freeways that connect it with many other cities and towns as well as a highly developed railroad too.

Fresno is a large city with many public and several private schools for children. It is a place where you can easily get a secondary education and continue studying in the university or college. Many people say about a very high quality of education in Clovis, a city adjoining Fresno.

Located in the San Joaquin Valley Fresno is a center of the large-scale agricultural production. It is the place where you can enjoy the tastiest fruit and vegetables all year round. There are 1.88 acres of fertile land there and farmers grow over 350 crops each year. Almost 20% of jobs in the Fresno area are available in this sphere, which contributes over $5.6 billion to the state economy annually.

Living in Fresno, CA allows its residents to enjoy tasty and mouth-watering dishes. Many people believe that there is no other place in the US where you can try so delicious tacos. Other exclusive dishes cooked in Fresno originate from Mexico, Hawaii and old Indians. You should not lose an opportunity to taste nachos with many different sauces, tots, Indian ice cream, Molucca chocolate, romanesco and many others. Don’t forget to taste local beer and wine as well!

Naturally, despite a very high unemployment rate, the job market in Fresno continues to grow. A recent job growth was 2.3% that is higher than the average one in the US. Future job growth is expected to be rather high too. 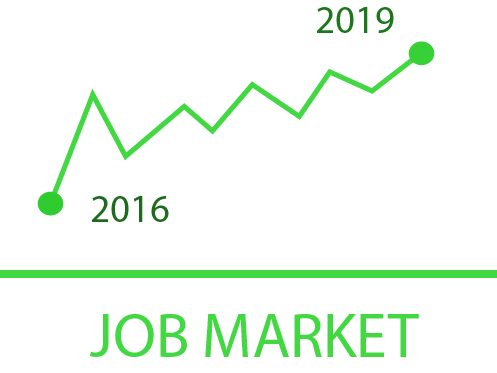 Most of the local population are employed in healthcare, retail trade, educational and food services, manufacturing.

Fresno can be called the bohemia of California. There is an annual city arts festival held in Tower District, let alone many different venues where arts and music are performed. There are several historic theatres, museums, zoo and even multiple annual events devoted to a variety of themes.

Reasons not to move to Fresno

It is important to remember that not everything is so good in Fresno. It is important to think twice before making a final decision of moving to Fresno, CA as there are many reasons that can influence it. Unfortunately, the city has several rather significant drawbacks.

Are you ready to live in the city that increases your chances of being seriously ill? In fact, Fresno is one of the cities where PM2.5 concentration is one of the highest in the country. It leads to holes in the ozone layer and an impressive list of health problems including lung cancer, delays in development, and premature death. Small particles, dust, different gases that are contained in the air and subjected to heat delivered by the sun are a bomb that will once explode.

The reason for such serious pollution is a highly developed extraction industry and a bowl-like shape of the valley the city is located in. It does not allow air to spread and increases the concentration of negative substances.

Being surrounded by mountains and having no fresh coastal breeze makes Fresno a real desert in summer. The heat gets so unbearable in July and August that it is impossible to go outside. Moreover, holes in the ozone layer make the sun much more aggressive and increase risks of skin cancer as well.

25% of Fresno population live below the poverty line. There is the highest concentration of young people who have no money to earn their living. This and many other reasons make Fresno a dangerous city. If to analyze that the crime rate in California is higher than the national one, in Fresno, it is even higher than in the state. The number of violent crimes is 565 per 100,000 residents, while the number of property crimes is 3,841 – almost 40% higher than the national average one. 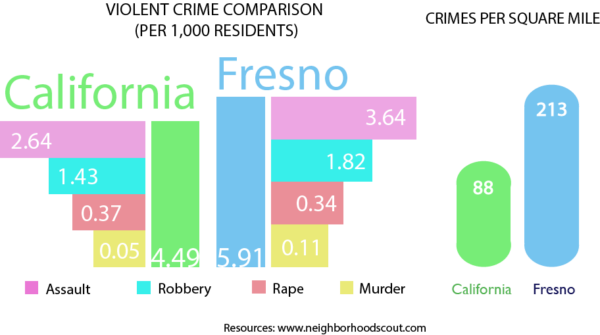 In 2018, it was estimated that Fresno takes second place among the cities with the highest number of people living in poverty. Every 4th resident cannot earn enough to live happily in the US. Only 6.7 percent of adults have a bachelor degree here. Despite a big number of well-paid jobs, there are no specialists to work on them. It leads to a high unemployment rate of 7.5% in December 2018.

Combined sales tax rate in Fresno is higher than in California – 7.95%. Remember, that all other taxes characteristics of California state are applied here too. 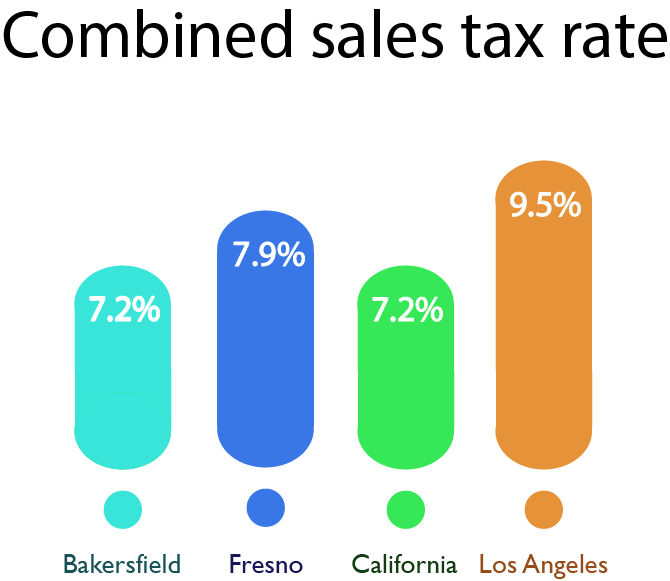 Things to do in Fresno and around the city

Despite being an industrial city, there is much stuff to do in Fresno too. Sitting in the middle of the valley and being surrounded by mountains, the city offers great recreational opportunities for its residents and guests.
The city offers a unique possibility to visit underground gardens. You can see a variety of animals in the local zoo, walk or cycle in the several national parks, exciting museums, magnificent churches and cathedrals, and other points of interest. There are many things to do in Fresno including hiking, biking, climbing, fishing, camping too. You can also visit different annual events.
There are parades and celebrations to appeal to everyone. It is the only place where you can visit a Blossom Trail and festival, street fairs selling antiques, unforgettable rodeo, vintage and big hat days. Car lovers will appreciate a car show, while wine connoisseurs can make a journey to a dozen of local wineries and breweries.

The Best Neighborhoods in Fresno

When you arrive in Fresno, you would like to live in the place that has at least basic amenities, offers good job opportunities, is safe and affordable. In this case, it is important to choose a good neighborhood in the city or near Fresno.

It is always important to prepare for a move, so we have found several useful resources for people who relocate to Fresno.

Are you planning a move to Fresno? Do you want to save your belongings and bring it to your new place? If so, it is better to hire ourmovers in Fresno for your needs. It is a guarantee that all your stuff will be delivered safely.